i went to my 20 year high school reunion yesterday. it was bizarre and surreal, as these things tend to be. one of the moments that kind of summed it up for me was when Maria Vourvoulias, whom I haven't seen or had any contact with for 10, maybe 20 years, said to me that she remembers we were in drafting class together and i could draw really straight lines. i thought to myself, "...drafting class?... my high school offered a drafting class?"

The whole evening was a fascinating look at how memory works, or in my case, doesn't. it was an evening of meeting familiar stangers with little or no context to understand who they are now. i was trying so hard to remember who these people were 20 years ago that when they told me what they were doing now, i was surprised. Subconsciously, i must have just assumed that they were still sitting in their cars in the parking lot, smoking pot and listening to Rush. in reality, they were out becoming things like doctors, engineers, and parents. i was taken aback only because in my mind i froze them in time and didn't realize it until they told me otherwise.

the other profound moment last night was michell okino (again, no contact for 10 maybe 20 years) telling me that she often explains to people that her high school was so white that they had an asian american (me) play Tituba (the black slave) in Arthur Miller's 'The Crucible.' Yes, it's true, and I've been mulling over this fact for several days now leading up to the reunion. But the problem isn't that the school was "white." My being cast as Tituba is already ludicrous, but what's even more bizarre is that the school was actually extremely diverse. In addition to a handful of black students who i had been in classes with since the first grade, there were black students who were bussed in from East Palo Alto. Thinking back now, i realize i had very few classes with anyone who was bussed into school. it's as if we were all at the same place, but went to totally different schools. we existed on completely parallel and unconnected universes. it's sad and strange that that actually happened, but it's even sadder and stranger that no one talked about it at the time. how extremely f#*cked up does the situation need to be when you have a school where half the student body is black, but not a single one of these students was invited to, felt comfortable enough, or had the means to audition and perform in the school play? AND just to make matters worse, an asian american was cast in the role instead. it makes my head spin to think about it. this was a failure and a lost opportunity to teach the real issues of history, race, class and gender in america. i wonder if it's different now. my senses tells me it's not.
Posted by rania at Sunday, August 20, 2006 No comments: 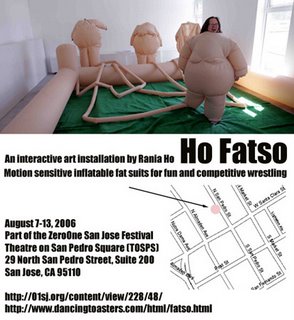 For those out on the west coast, I'm showing the Ho Fatsos at the ZeroOne San Jose Festival/ISEA2006 Symposium.:

and yes, it's very nice to be back in SF. i eat avocados every day and use a down blanket in the middle of summer. it's nutty and wacky.
Posted by rania at Friday, August 04, 2006 No comments: