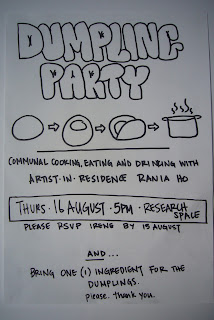 why do an artist talk (*yawn) when you can make dumplings (*yippee!) instead?
Posted by rania at Tuesday, August 14, 2012 No comments: 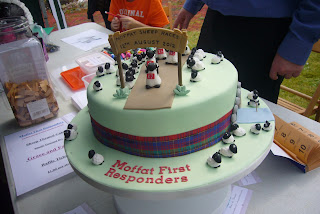 last weekend i was in moffat, scotland visiting a friend and watching sheep races. yes, indeed. they raced clueless and stupid sheep from one end of the main street to the other with stuffed jockey dolls velcro-ed onto the backs of each sheep. people were cheering, putting down bets and a lot of sheep themed mayhem ensued (mostly in the form of a mechanical sheep-bull, and an inflatable bouncy castle for kids). cruel and unusual? you be the judge. it was ke-ray-zee scottish antics. you want to watch a video of the racing sheep, don't you? of course you do.
Posted by rania at Tuesday, August 14, 2012 No comments:

yesterday i had quite possibly the worst sandwich i've ever eaten in my life: brie, cranberry, butter, cucumbers and tomato on a soft roll of what looked like wheat bread, but was definitely not. soft, with no chew, nor crust, the bread could not hold its shape and started to fall apart from the first bite. the contents were lifeless and gooey, not to mention warm. the cranberry slapped in as an afterthought, only highlighted the offensive butter on cheese combo. butter and cheese were in there in equal ratios. yuck.

i thought the sandwich was invented on this island. 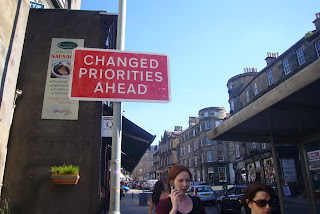 this was probably the best road sign i have seen in a long time. 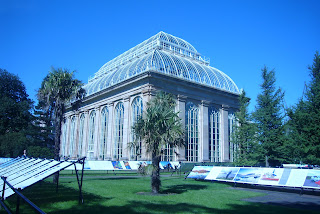 i also walked to the botanical gardens 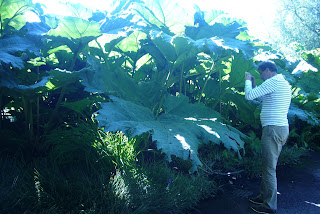 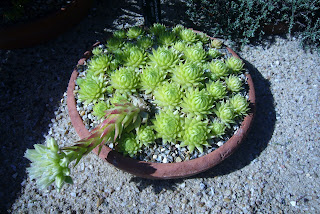 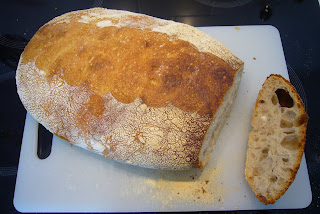 i also baked some bread.

There was a great Philip Guston exhibition inside the gardens at Inverleith House. let's not discuss the bad theater that i saw as part of the fringe festival.  Then I ate some curry.
Posted by rania at Friday, August 10, 2012 No comments: 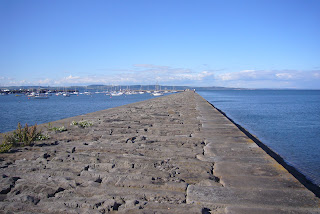 i'm doing a residency at the edinburgh sculpture workshop. got here 6 days ago. beautiful new building. amazing people and suddenly, blue skies after 4 days of pouring rain. now there's stunning landscape and light. the photo above was taken about a 10 min walk from where i'm staying. wah!

here are some highlights from the last few days:

- cries of sea gulls overhead heard first thing in the morning, every morning
- smells of the sea
- saw a rat mouse under the sink
- took an amazing walk in the rain
- ate cake for lunch
- made sourdough bread
- computer died
- made some little drawings
- borrowed a computer from some very generous friends (through some amazing tweeting to get the thing delivered over here)
- realized that the fringe festival is a trade show
- walked to the pier and saw people catching mackerel
- saw this performance at 10:30am in the morning (which was fun, i recommend it if you are here at the fringe)
- ate lemon cake off a plate decorated with the union jack

what's with the cake here? i've never seen/eaten so much cake. i've been offered cake at lunchtime; cake at dinnertime; this morning at the 10.30am performance, the crew was offering scones with butter and jam to audience members before the show. i took one look at that massive lump of dough and thought, "euuh," and had some strong tea instead.

as you can see, everything is going well. even having no computer for a few days was (slightly distressing, but ultimately) refreshing. no distractions. really what a residency should be. looking forward to 2 more weeks. aaaahhhhhh. 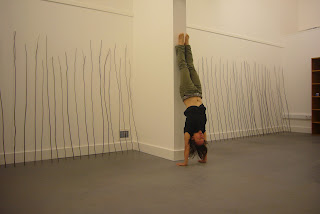 oh, and here's me making clichéd stick art, and then doing my best imitation of the stick art that i made.
Posted by rania at Wednesday, August 08, 2012 No comments:

hello world. i lost my camera two days ago. i'm very sad. in an attempt to make up for my carelessness, let me tell you about the photos i lost.

We had been on a southern sojourn to shenzhen, guangzhou and hong kong. we took a 24-hour train to the south from beijing. We went to a 50th birthday party on a yacht that meandered in a loop around hong kong island. everyone was dressed as pirates and sailors. there were some beautiful costumes of explorers and sea farers from days gone by. there was a pair of platform shoes with plastic fish in the heels, maidens in corsets, eye patches and inflatable swords. we dressed as makeshift sailors. we went swimming in the sea. i'm so depressed that these photos are gone. they were beautifully funny. of course since it was hong kong, the costumes melted off 30 minutes into the trip. the humidity quickly took its toll, but i managed to capture a few of those initial glorious moments. now i have lost them again.

we went to an art exhibition, but i didn't take any photos there.

We went to a factory town called chang'an. in chang'an we were driven around in a minivan by a mafia boss. he was free to chaperone us that morning, but later that afternoon he would go pick up some extortion money. our friend, who is an artist, was his neighbor while growing up. they both still live in that same town; their lives branching off into polar opposite directions, but with roots intertwined.

The mafia boss drove with pop music pumping and took us to see abandoned factories overgrown with weeds. we went to see fishing villages that have traded the bark used to cover their homes for corrugated steel. the structure of the homes, hovering over the water on stilts, was the same, only a material change of light green ribbed paneling is different. we went to ancestral temples where the faces of the gods were clearly modeled after actual citizens. we saw mosaic tiles covering apartment blocks, endearing in their sense of aspiration. at some point while we were driving around the mafia boss turned to our friend and asked why we'd want to see such strange things. the mafia boss suggested going to a park to see the scenery, but our friend didn't take his advice.

we went to eat food from what is supposedly my hometown, although i've never been there. I took photos of Shunde homestyle cooking to show my dad. There was a small delicate fish that was dried and then re-steamed. There was a light green leafy vegetable whose veins glowed a shade of purple. there was soup that tasted of my grandmother's cooking (although she wasn't from Shunde). there was homemade tofu with a small pinch of pork stuffed into it. a photo is really a poor substitute for tasting this food, so perhaps having no photos is ok. I'll have to tell my dad about it instead of lazily showing him.

i went to an art fair, but didn't take any photos there either.
Posted by rania at Friday, May 18, 2012 No comments:

wang wei and i are off to manchester soon for the Kitchen Project. we're taking some lessons that we learned in cooking classes here in beijing and transmitting the information to a few lucky hosts in Manchester. We have no idea who the hosts will be- it's being organized in secret by our collaborators, Quarantine. We're just going to turn up at a complete stranger's house, walk straight into the kitchen and start cooking and chatting. should be wacky fun. we'll be keeping track of the project on this blog. tune in and see what transpires:


KITCHEN PROJECT: COOKERY CLASSES THAT COME TO YOU…

What does it mean to make and share a meal?
What’s actually being traded in “cultural exchanges”?
From Saturday February 25th until Thursday March 1st 2012 two artists from Beijing, Rania Ho and Wang Wei, will explore these questions and more by roving around Manchester teaching cookery classes in people’s homes. Classes will cover various topics from basic knife techniques, to step-by-step instruction on a selection of tasty dishes. They will bring all the necessary materials and tools, and improvise when necessary. Participants should provide them with full access to their kitchens.
The class is free, but class sizes are limited as they will be hands-on with participants preparing and sampling multiple dishes during the 3-hour long session.
Kitchen Project is a collaboration between Quarantine and artists Rania Ho and Wang Wei, commissioned by Chinese Arts Centre. Ho and Wang are installation artists who experiment in various mediums - Ho with transforming common household products and Wang creating pseudo-architectural forms. Ho and Wang are also two of the co-founders of Arrow Factory, one of Beijing’s most intriguing storefront art spaces.
Kitchen Project plays with ideas about tourism, authenticity and food to delve into an exploration of the term “cultural exchange”.
Since 2006 Quarantine has been in creative conversation with Ho and Wang, and over the last few years they have made bread, met musicians, pawn brokers, refugees, the people responsible for branding Manchester and many more. This upcoming project opens their ongoing conversation to the general public where the artists will act as “hosts” in the transmission of some simple cultural and culinary knowledge. Rania Ho and Wang Wei are not professionally trained chefs - they are visual artists who enjoy cooking. All their knowledge was gained through learning from others. 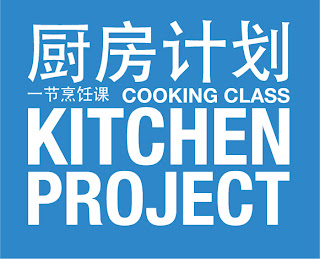 Hi all, there's new work up at Arrow Factory. if you're in the neighborhood, swing by. a fab new installation by Lee Kit. you'll thank me for it. i swear. 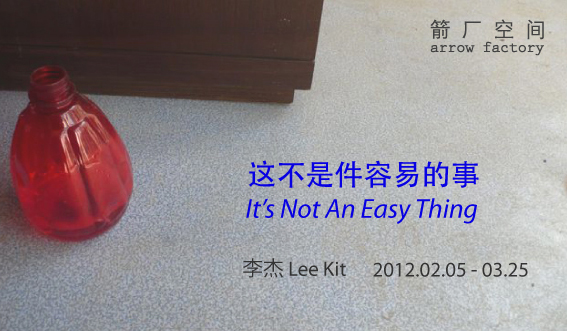 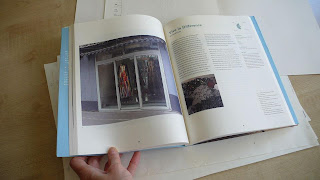 hot damn! a review of 3 Years: Arrow Factory in Domus! some nice pics shot by wang wei and pauline (the official AF Hand Model) and a lovely writeup by Pelin Tan. 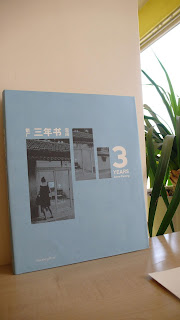 want to order your own copy of this lovingly made volume? order direct from us: goo.gl/CYgSH
or from our publisher: goo.gl/4vl0m

thank you for your attention.

http://www.domusweb.it/en/book-review/trans-locality-and-dissemination-3-years-arrow-factory-2008-2011/
Posted by rania at Sunday, January 29, 2012 No comments:

Bay Area pee-poles! here's your chance to get a gander at our new 3 Years: Arrow Factory book.  we're doing a little book talk at the Kadist Art Foundation in the Mission TOMORROW (Sunday Jan 8, 2012 2-4pm). we have only limited copies of the book with us. if we run out you'll just have to get your local bookstore (do those still exist?) to order it from our publisher (goo.gl/4vl0m). don't miss out. look forward to seeing all your happy faces there.

below are the details. info is also online at www.arrowfactory.org.cn: