new, and old, and new

AT LAST i've updated my website! www.dancingtoasters.com didn't exactly get a full makeover, but it's better, new and improved! (trust me.) the front page will look mostly familiar to regular visitors, but i've consolidated, moved some things around, got rid of some old junky things. kind of a spring cleaning, except it's almost december.

In other news, my in-laws are going to be moving from their beautiful 100-year old courtyard house in the center of beijing. all the land around them has been developed, and their house is slated to be a parking lot. it was only a matter of time before the developers came knocking at their front door. in a week they will turn over the keys and start shopping for another place to live. yes, of course they were compensated, but how could they find another place as lovely as this: and finally, kupa studios is nearly finished with our most recent design project: a bakery in the shunyi district of beijing called Boulangerie Nanda. Nanda makes artisan organic breads and pastries. Look for it at the Lohaos Organic Supermarkets starting mid-december. if you don't live in beijing, you've probably got 5 other organic supermarkets near you that sell amazing bread, so stop whining.

[curiously, the kupa website is blocked in china. if you are a mainland viewer, here is a link to the flickr set of other kupa projects] just opened at the Arrow Factory! 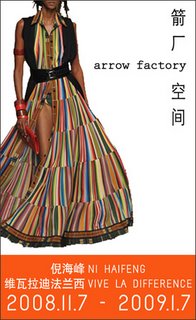