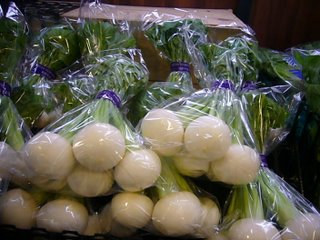 we will be at the one week mark in yokohama as of tomorrow evening. a lovely place, and our sponsor Takahiro Kaneshima is taking very good care of us. yokohama is mellower than tokyo but with all the japan wackiness. i don't know what i mean by that except that these perfectly shaped radishes pictured above all neatly tied and meticulously plastic wrapped are in EVERY grocery store at the moment. how do they get them all to look exactly like that? how do they get them all to the shops without damage? somehow it seems more surreal because the pace in yokohama is quite calm. we settle into a regular rhythm, relax into thinking that we are acclimatizing nicely then suddenly KA-BLAMO, you turn around to find that the bizarre vegetation has surrounded you.

this week's adventures included a 5 hour guided walking tour around the city that started at a temple and traditional noh theater, meandered around to tiny (tiny!) yakusa run bars, reclaimed brothels that are now being rented to artists as live/work spaces, open air markets and a trapse through what i guess would be considered the slums, although since it's japan, it's still pretty clean and civilized. The yokohama arts commision coordinator, mr. sugizaki, took us to a slurp-worthy soba restaurant along the canal and then headed us over to the yokohama hostel village which is in the aforementioned derelect part of town. the youth hostel is run by a charismatic mr. okabe, an artist and activist. not only did okabe run a very successful 'get out the vote' campaign in this last election, and help to revitalize the area by opening the youth hostel, he is also one of the contributors on a very cool project called populuscape which maps population of cities over time, flight routes and other statistical data in a poetically beautiful and meaningful format. one of the best data visualizations i've ever seen. really.

yesterday we were invited to an international pancake party where team japan made okonomiyaki, team austria proffered sweet crepe-like palatschinken, and team usa/china made no pancakes, but offered a light salad and stir-fried celery to balance out the copious amounts of flour and eggs. i was so full. all delicious, every last bite.
Posted by rania at Sunday, February 08, 2009